Poster presentation at NeurIPS 2022 at this social affinity group. 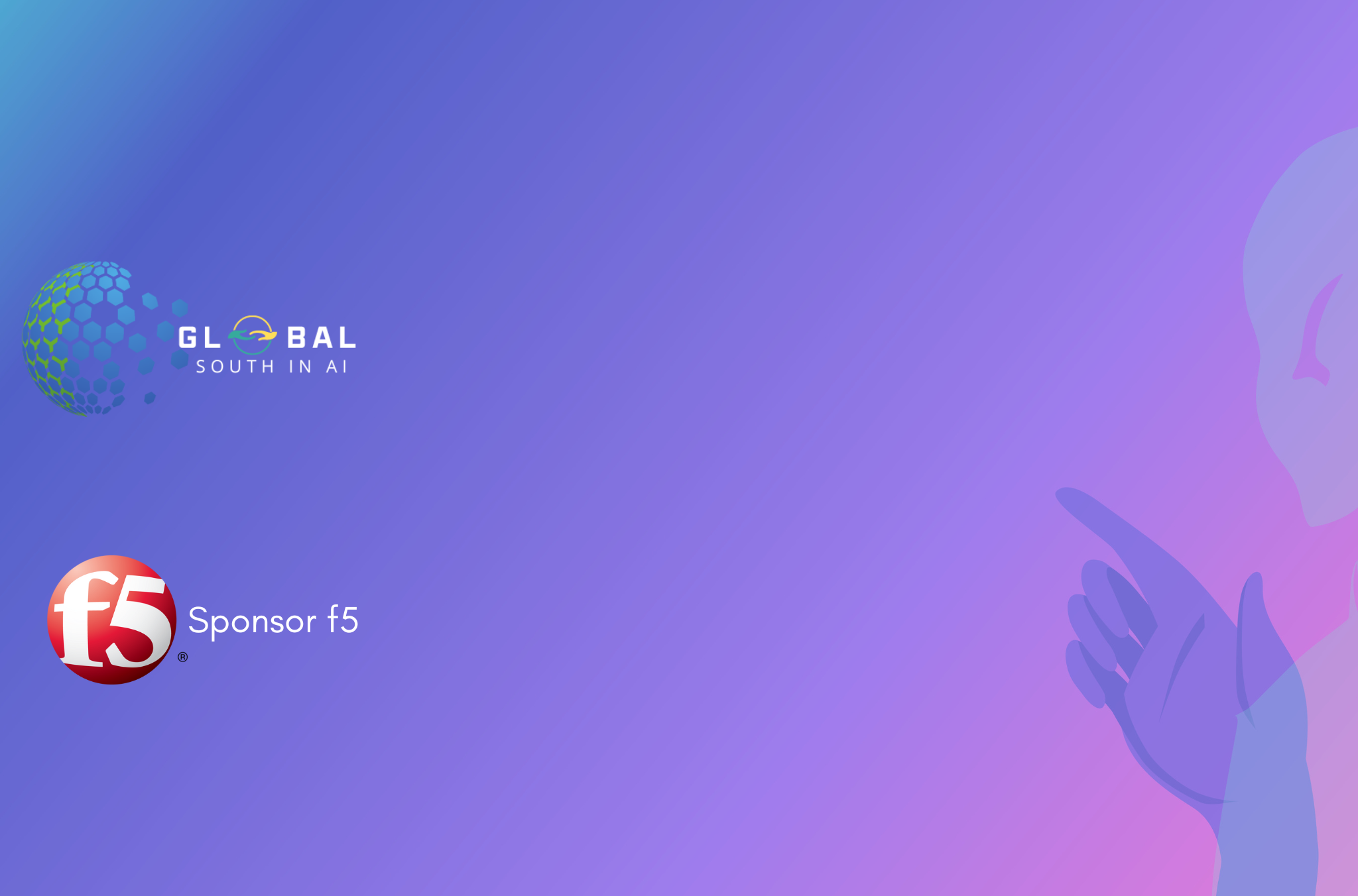 Global South in AI @NeurIPS 2022 is officially over.

F5 is a security company committed to bringing a better digital world to life.

Questions about Language AI? Want to discuss with Program Chairs? 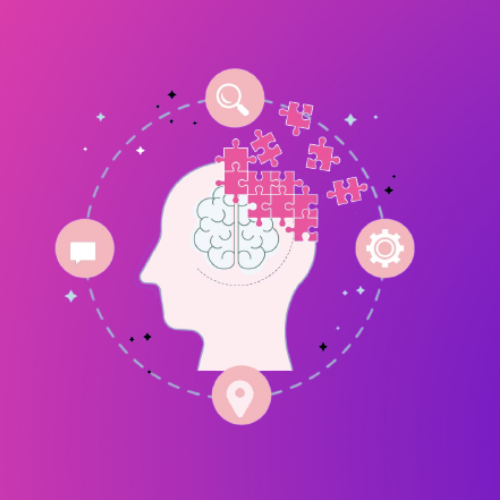 The Global South in AI Meetup's main objective is to offer an annual multidisciplinary academic meetup with the highest ethical standards for a diverse and inclusive community in order to promote the exchange of research achievements in Language artificial intelligence and machine learning. The global south, which has a long history of colonization, has taken charge of its language AI with renewed zeal in an effort to create a new world order that will be built on a past of colonization and create language richness within AI. This cannot be satisfied by translation models built with transfer learning or the latest Zero-Shot Machine Translation 7 model which is adding more languages without the AI getting a single line of translated data. We need the global south to come together to build language models in a way that works efficiently and with the story of our history. We began our journey by bringing 31 authors with 12 double blind peer reviewed posters to NeurIPS 2022 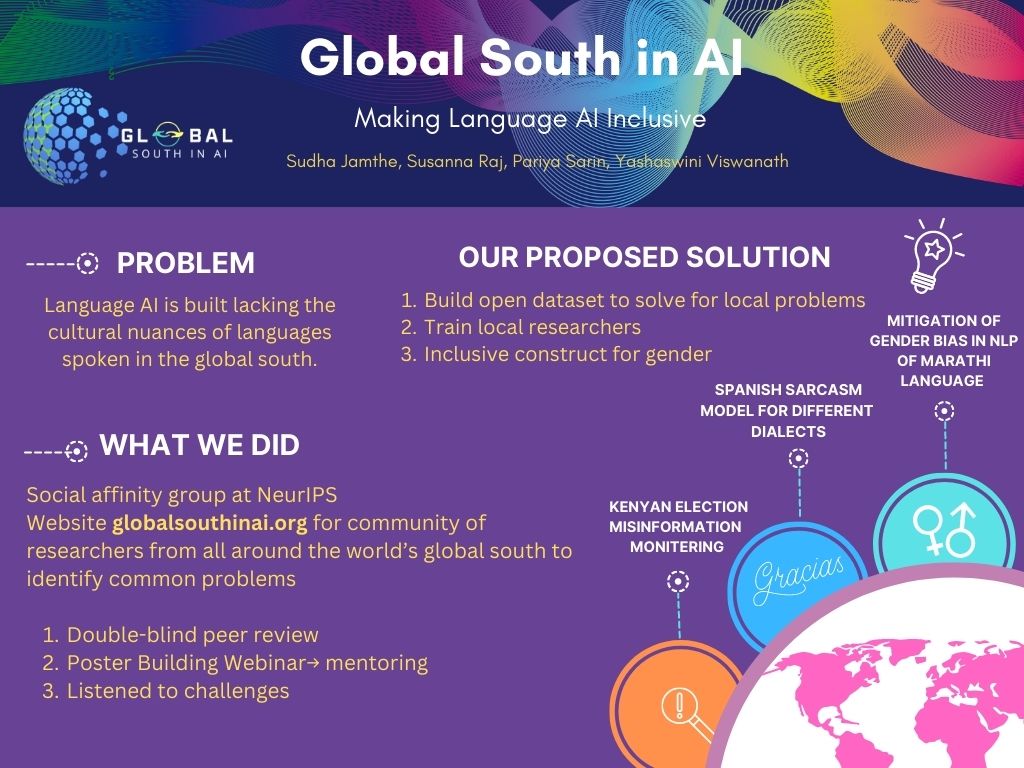 Workshop, in-person and virtual posters from 31 authors. Click to watch the workshop and see the proceedings from NeurIPS2022 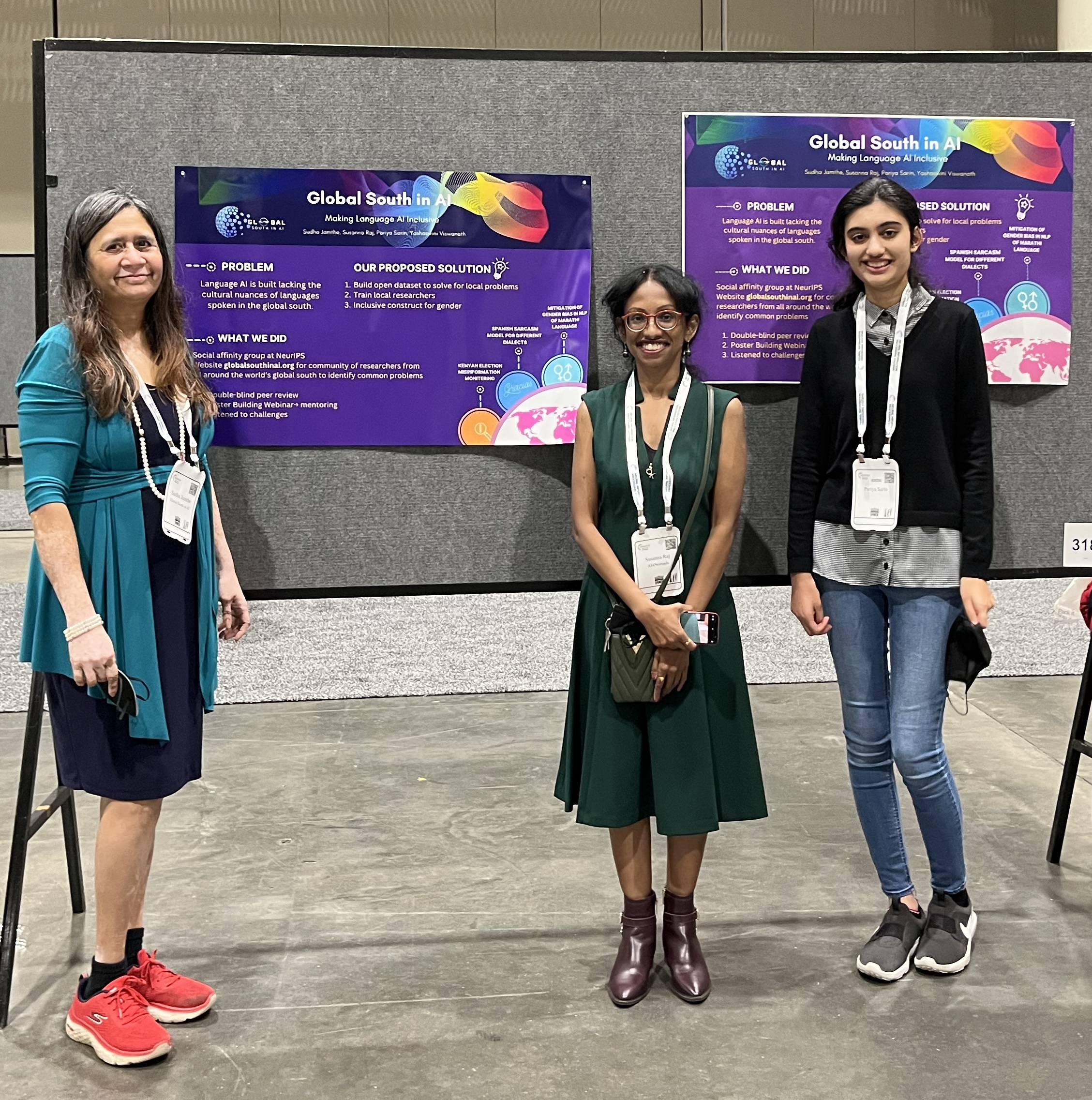 A Glimpse of Our Wonderful Authors! 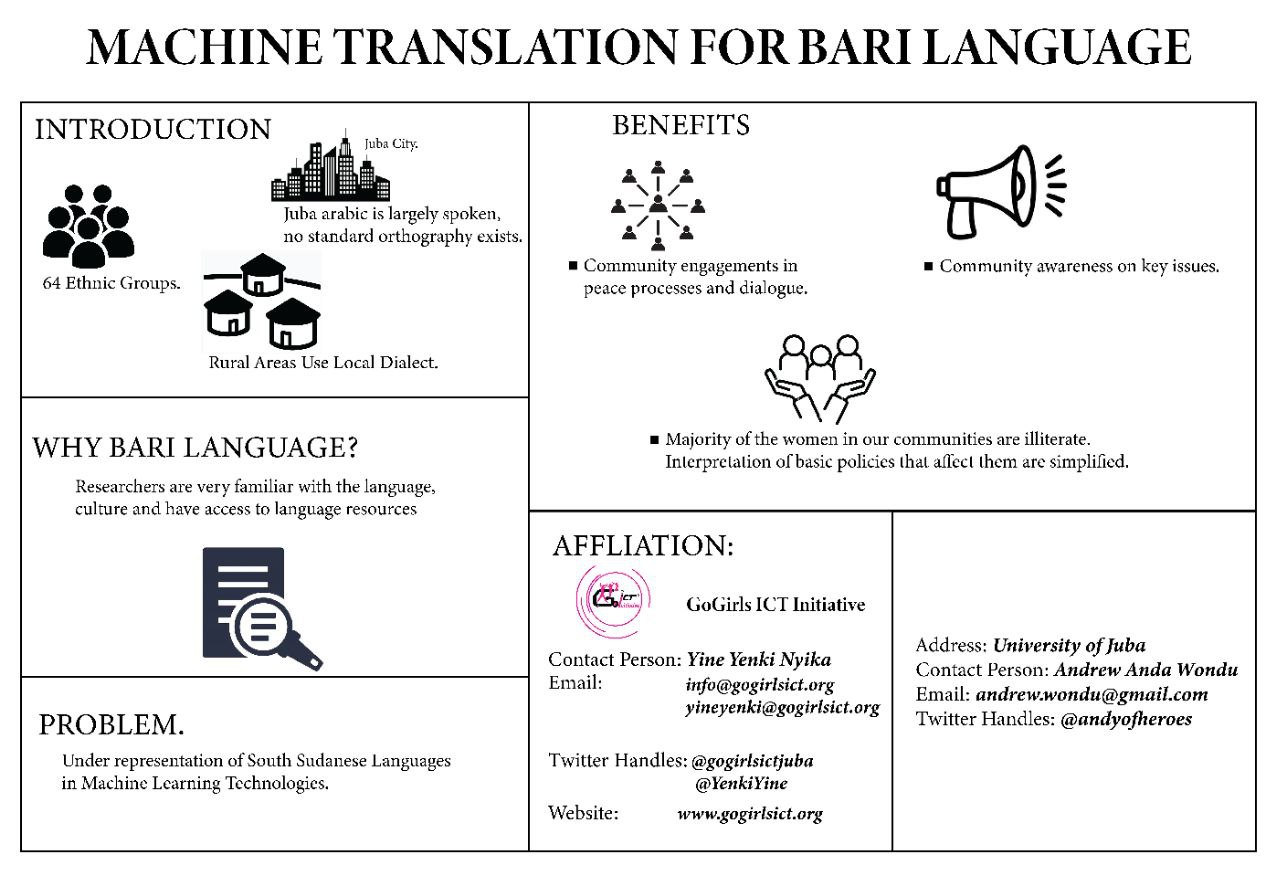 South Sudan has 64 different ethnic groups, and probably more languages. Juba Arabic is largely a spoken language and no standard orthography exists. The writings that do exist use a Latin based alphabet. The researchers, therefore, opted for Bari as a case study for a “low-resourced” languages because it is the language they are most familiar with. South Sudan and other countries in the global south are severely under-represented and are largely not benefiting from new technological advancements. Our goal is a Bari language dataset. This dataset could be useful in many ways. For example, uncovering implicit gender biases. Other applications are in language education or scanning internet forums for hate speech. 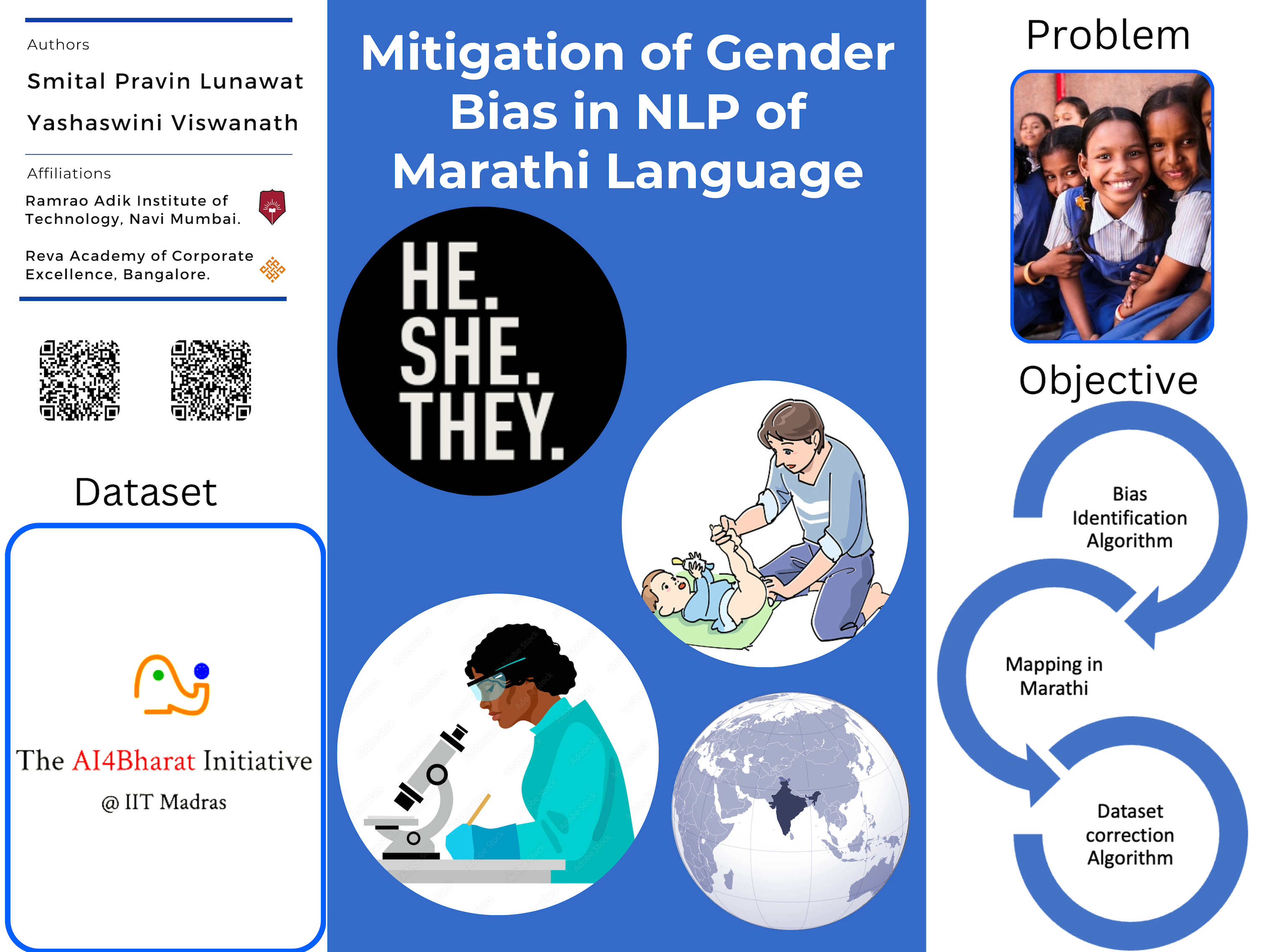 Mitigation of Gender Bias in NLP of Marathi Language

This research paper focuses on the stereotypes present in the Marathi language and properly training the data set by the usage of paired pronouns in Marathi (तो/ती/ते) and gender-neutral terms (सहभागी). Training systems to not interpret gender roles unless defined is a major way to eliminate gender bias from written texts. The generation of a truly unbiased dataset would be possible by giving representation to individuals belonging to different demographic groups where there is a slight change in the way a language is spoken or interpreted. 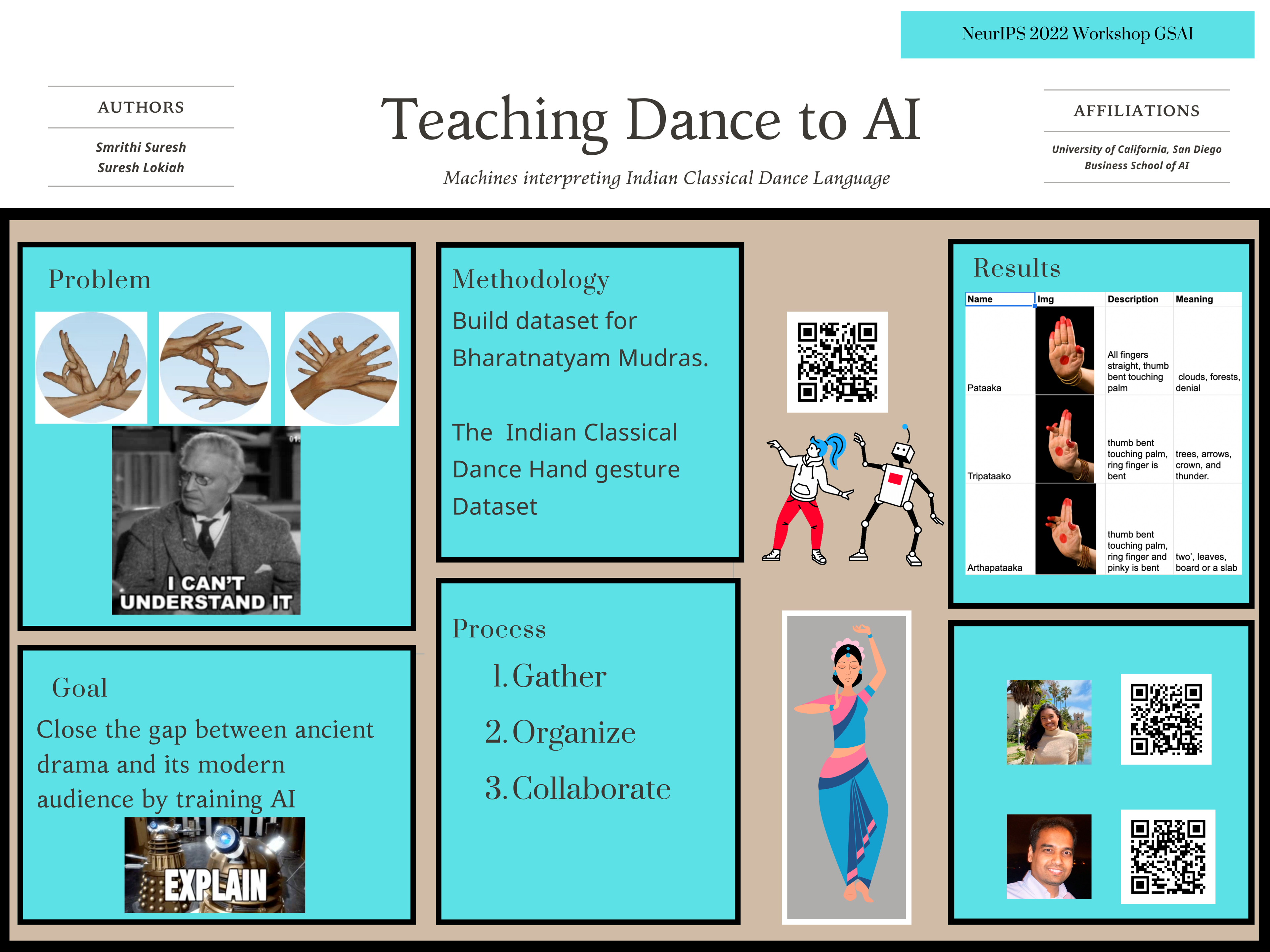 Bharatanatyam is a traditional Indian classical dance dating back to the second century. Bharatanatyam is a combination of different hand gestures (known as mudras) and facial expressions that form a type of sign language. Although a lot of dance connoisseurs may be aware of how to understand that language, showcasing Bharatanatyam to a global audience comes with its struggles because they may have never seen the art form before. The project proposed is to build a dataset with specific hand gestures found in Bharatanatyam and their English interpretation that could be leveraged to create an AI model to interpret the gestures’ meaning, hopefully making Bharatanatyam a more understandable art form. 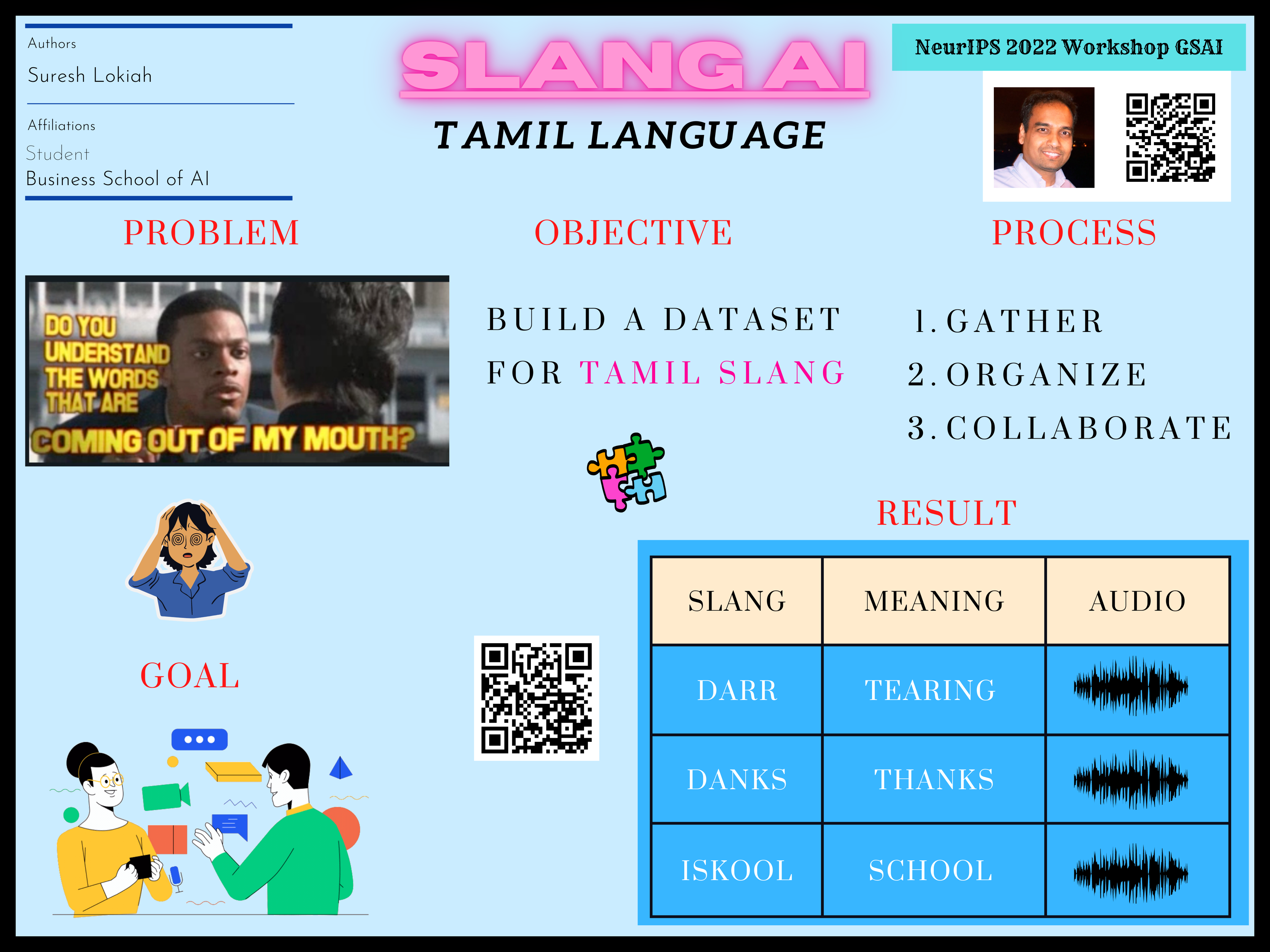 The Tamil language has evolved to fit the cultural and social-economic groups in the regions. One such evolution is Madras Tamil. It combines words from English, Telugu, and Hindi to have its flavor and vocabulary. It exists primarily in spoken form among people with a lower education background. India being the Bollywood capital, this language flavor is now being infused in many movie songs commonly referred to as Tamil Kuthu. The current AI systems and language translators only perform translations for pure Tamil language words and have not developed to make sense of Madras Tamil (or Tamil Kuthu). This paper attempts to create a dataset for Tamil Kuthu, which in future be leveraged to build a language model and translations in the future. 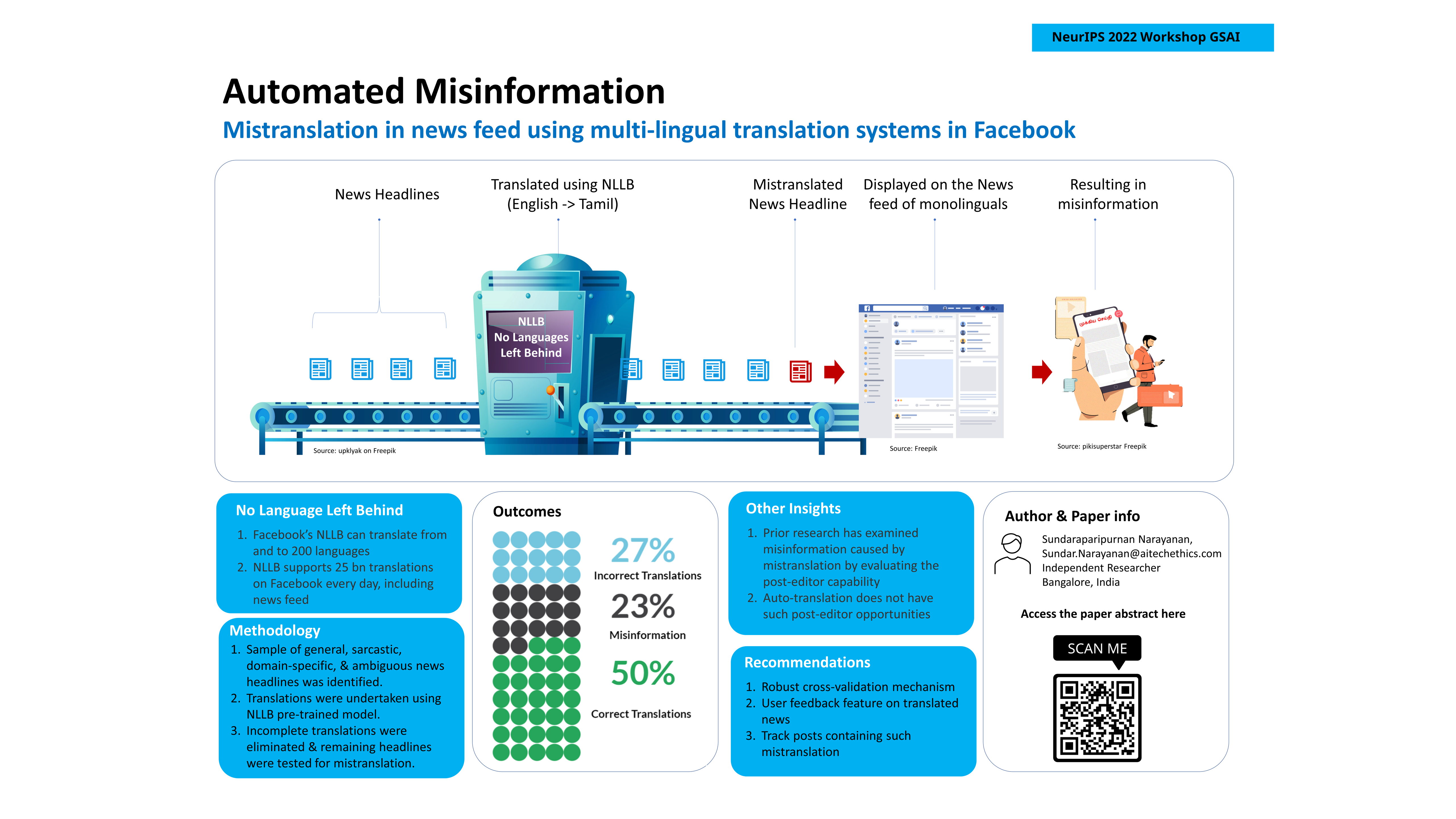 Facebook, in their announcement, mentioned that NLLB would support 25 billion translations served daily on Facebook News Feed, Instagram, and other platforms. A Facebook user receives auto-translated (machine-translated) content on his news feed based on the language setting and translation preferences updated on the platform. Multilingual translation models are not free from errors. These errors are typically caused by a lack of adequate context or domain-specific words, ambiguity or sarcasm in the text, incorrect dialect, missing words, transliteration instead of translation, incorrect lexical choice, and differences in grammatical properties between languages. Such errors, may, on some occasions, lead to misinformation about the text translated. This paper examines instances of misinformation caused by mistranslations from English to Tamil in the Facebook news feed. 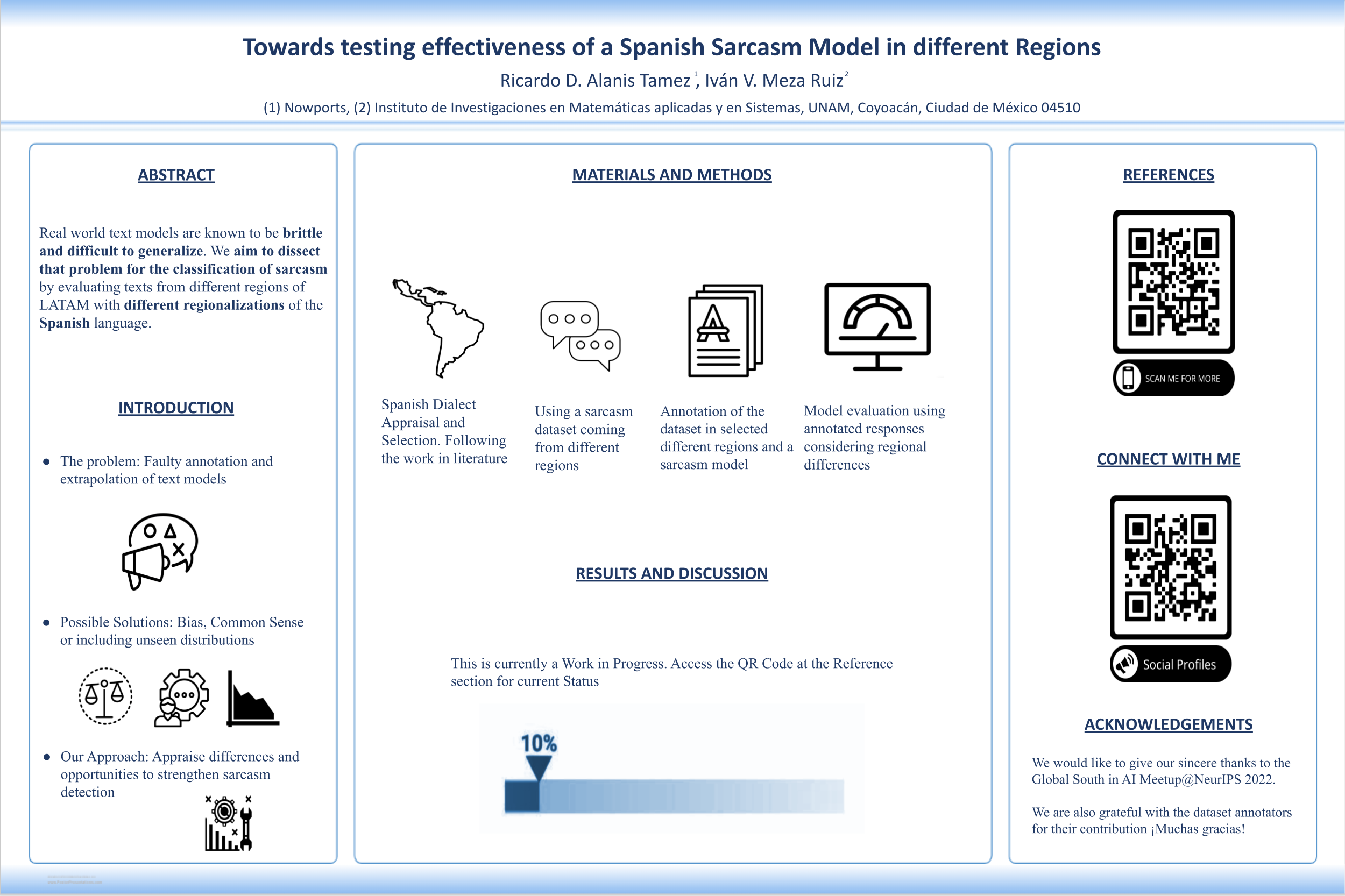 Real models, especially ones formulated for text problems, are known to be brittle and difficult to generalize. Several hypotheses exist on improving such models, such as introducing more inductive bias, adding more context to the models, and evaluating unseen distributions and tasks. We aim to dissect the problem of generalization of the classification of sarcasm by evaluating texts from different regions of Latinamerica with different regionalizations of the Spanish languages. This is done with a model and human annotation to assess the agreement between measurements. Results are then explored in the three dimensions of potential areas of improvement mentioned before, providing a guideline for the next steps for bettering the model to increase its resilience. 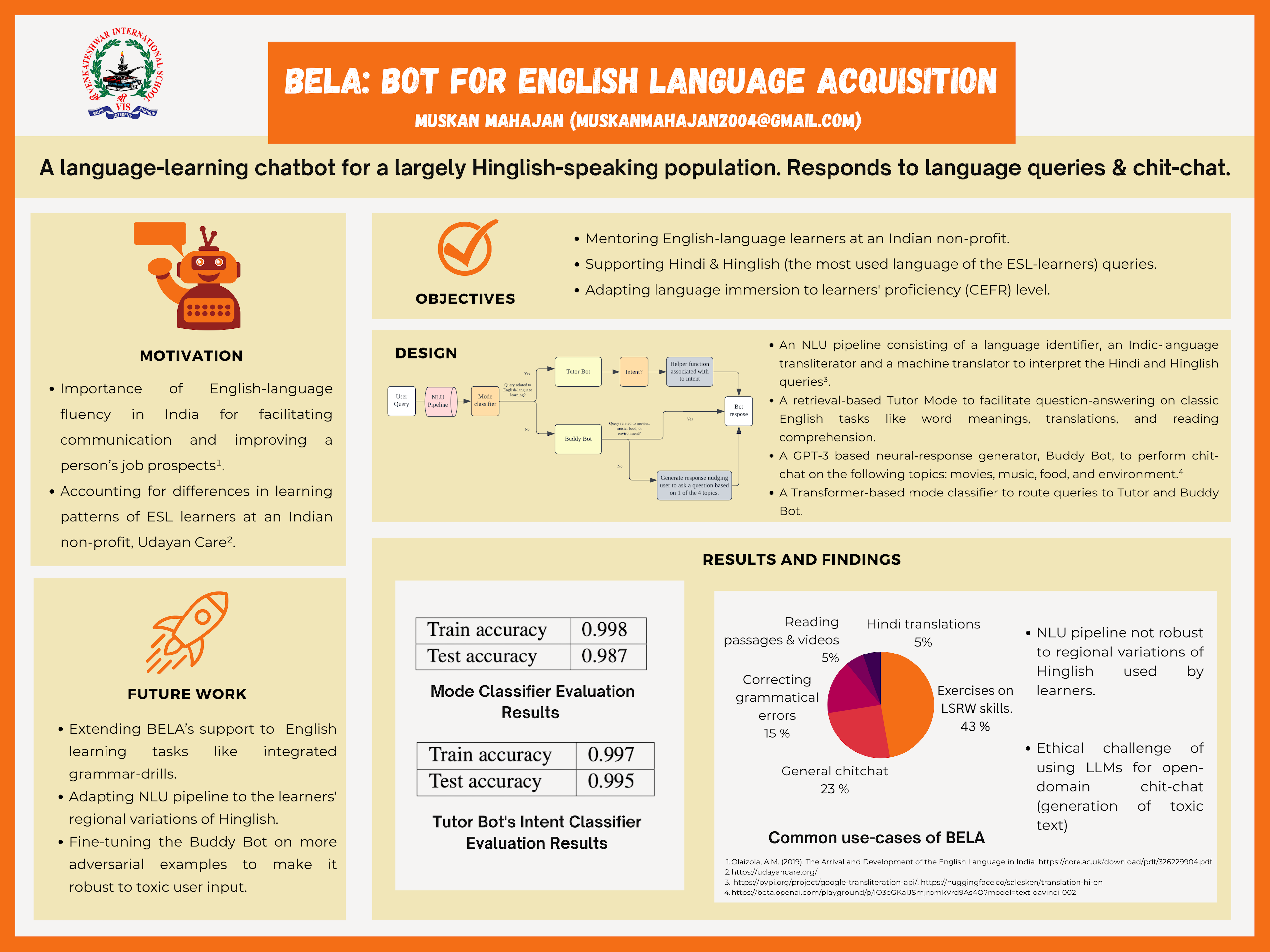 Our paper introduces ‘BELA’, Bot for English Language Acquisition, an application of conversational agents (chatbots) for the Hindi-speaking youth. BELA is developed for the young underprivileged students at an Indian non-profit called Udayan Care. Hinglish is a way of writing Hindi words using English letters common among 350 million speakers in India. BELA’s natural language understanding pipeline supports Hindi and Hinglish utterances by using a language identifier, an Indic-language transliterate, and a translator. The challenges in developing BELA included a lack of data for intent classification and DM, and a lack of a database for reading passages and English videos levelled by learner-proficiency level (CEFR); we solved these by creating a custom dataset with text-augmentation techniques, and building a CEFR level predictor for English passages scraped from the Web. Our future work would focus on extending BELA’s support to more English learning tasks and using the mentees' Hinglish messages to adapt the transliterator pipeline to the mentees' regional variations of Hinglish. 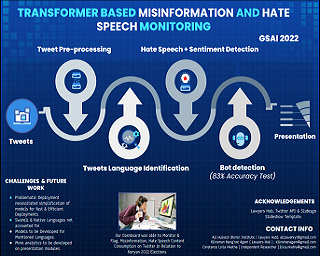 Kenyan presidential elections are a tense and problematic time. There are documented cases of voter-directed social media manipulation campaigns and incidents of post-election violence during election season. We build and test a dashboard to monitor the 2022 Kenyan election-related content on Twitter utilizing a BERT-derived pre-trained model for hate speech detection and an XLM-T pre-trained transformer for sentiment analysis, a balanced random forest is trained for detecting Twitter bots, and a pre-trained "bag of tricks" model for language identification. 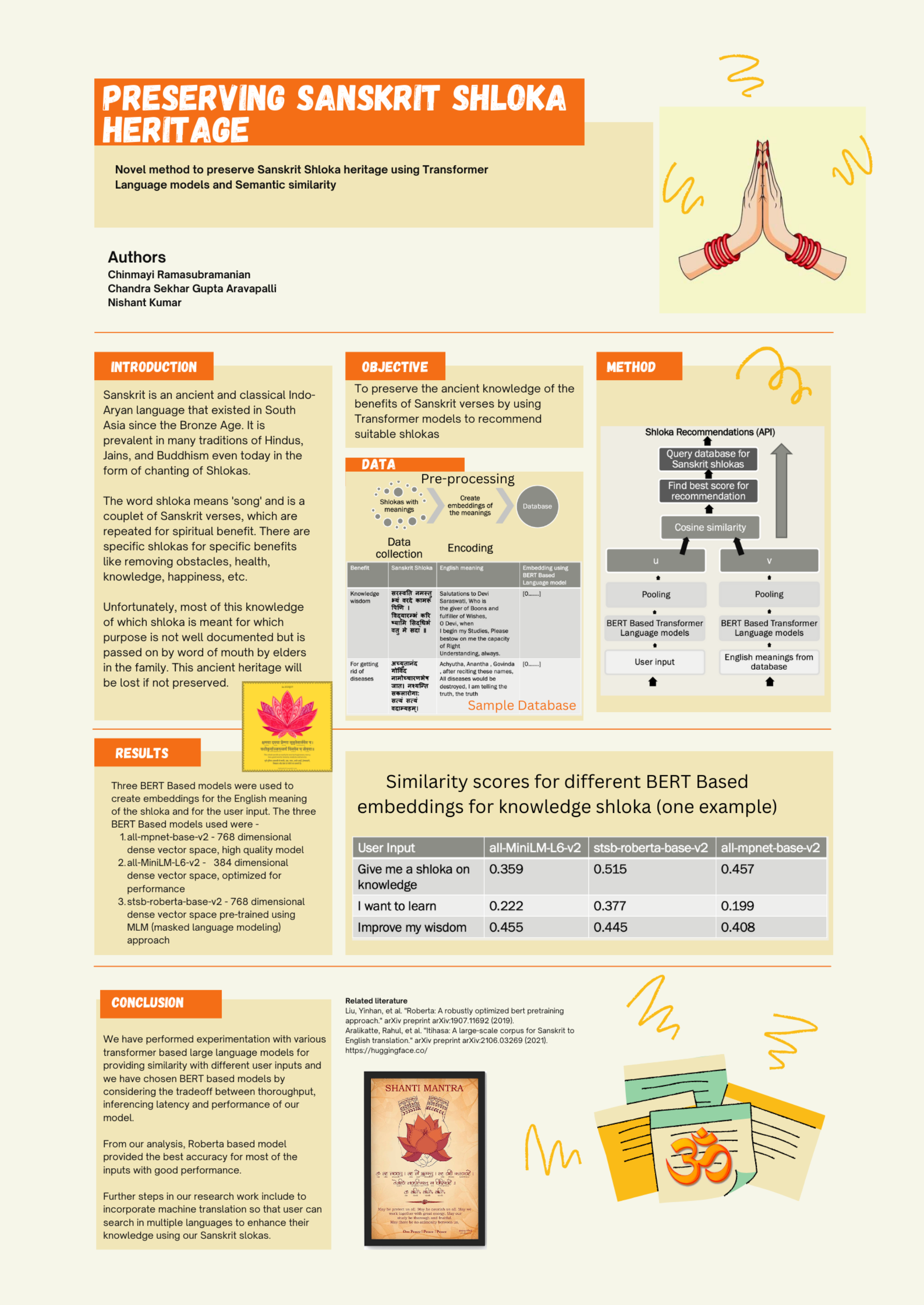 Sanskrit is the sacred language of Hinduism and was used in ancient Vedic scriptures, Hindu philosophy, literature, mythological epics, and historical texts. Sanskrit’s impact on India’s culture is well known but despite efforts of revival, there are no first language speakers of Sanskrit now. The word shloka means 'song' and is a couplet of Sanskrit verses, which are repeated for spiritual benefit. Currently, there is no such database that maps the Sanskrit Shloka to its benefit.  Embeddings of each of the benefits are computed using BERT, a pre-trained Transformer Language model and stored in the database. An API is built that takes input from the user. The use gives the benefit he wants to gain as input (Eg: “knowledge”) and maps it to the database. Semantic similarity is computed using cosine similarity, using which the system recommends one or more suitable shlokas. (Eg: विद्या ददाति विनयं विनयाद् याति पात्रताम्।). In the future, inputs from different languages can be supported. Thus, this heritage can be preserved for many generations.